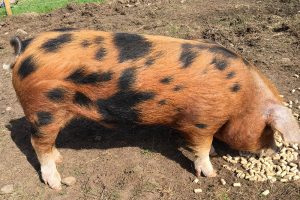 The Oxford Sandy and Black Pig, sometimes referred to as the “Plum Pudding or Oxford Forest Pig” is one of the oldest British pig breeds. It has existed for 200-300 years. The exact origin of the breed is lost in antiquity but the original Oxford Sandy & Black is believed to have developed some two centuries ago in Oxfordshire.

The Oxford Sandy & Black or OSB has reached crisis point at least twice in it’s past when numbers dropped so low that extinction was a real possibility. Unfortunately it had no Society or herd book to look after it’s wellbeing. As long ago as the 1940’s, boar licensing had dropped to one or two a year for OSB’s. If it wasn’t for a few dedicated breeders, the breed would surely have been lost. In 1973, the Rare Breeds Survival Trust was formed giving hope for the breed, but the Trust decided not to recognise the OSB. Once again the dedicated breeders were on their own. The decline continued to the brink of extinction when in 1985, the current Breed Society was formed following contact with all known breeders of the OSB by the Society’s founder secretary Steven Kimmins, ably supported and helped by Chairman Andrew J.Sheppy and President Geoffrey Cloke. The breed owes a great debt and its’ survival to them.

There were 29 herds listed in the first herd book with 15 Boars and 62 Sows. Sadly some of the bloodlines have been lost, but today’s dedicated and enthusiastic breeders are determined to save the remaining lines.

The current picture is very encouraging with the rarest bloodlines hanging on and slowly increasing. Hopefully the Breed is at last safe (although still relatively few in number) Recognition by, and transfer of herd book management to the BPA from the Oxford Sandy and Black Society has already brought the hoped for benefits of increased publicity and opportunity to compete in the shop window of BPA recognised shows.

Breed numbers have been increasing over the last few years. There are 4 male and 13 female bloodlines within the breed. 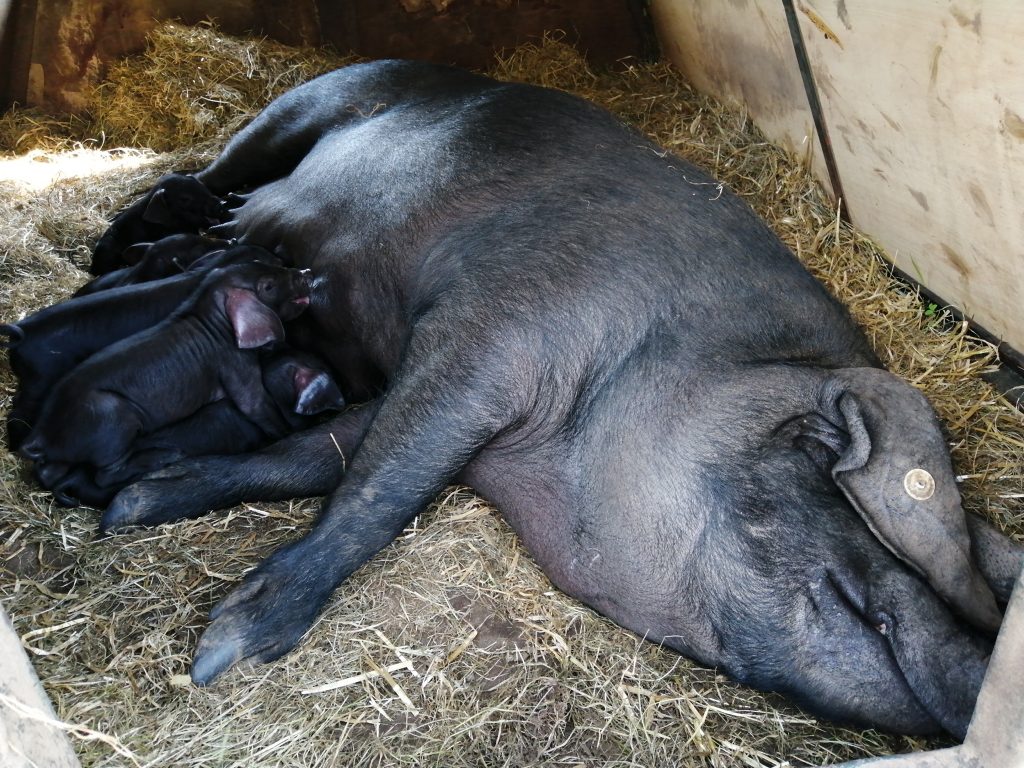 The Large Black Pig “ They are distinguished by their gigantic size, they are the largest of the kind I have ever seen, and as perfect a make as possible in pigs … their heads are large, with very long ears hanging down on each side of the face, so they can scarcely see their way”  Parkinson 1810

One of this country’s oldest pig breeds, the Large Black had its origins in the Old English Hog of the 16th and 17th centuries.  By the late 1800’s the main strongholds of the breed were in East Anglia and Devon and Cornwall, and two distinct types of pig were produced.

The founding of the Large Black Pig Society in 1889 led to an increase in the exchange of stock between the breeders in the two localities. In the early part of the 20th century, Large Blacks became more widely distributed and were frequently crossed with the Large Whites and Middle Whites to produce both porkers and baconers.  The Large Black enjoyed considerable success in both the Show and Sale ring.  At Smithfield Show in 1919 the Supreme Championship was awarded to a Large Black sow, subsequently sold for 700 guineas.  In the same year, Large Blacks outnumbered all other breeds at the Royal Show, with 121 being exhibited.

Their hardiness and ability to withstand sunburn made the Large Black suitable for a wide variety of climatic conditions.  By 1935 they had been exported to well over 30 countries worldwide.  In 1949 the Large Black Pig Society merged with the National Pig Breeders Association, later renamed the British Pig Association.  The BPA provides facilities for Birth and Herdbook notifications and are concerned with all aspects of pedigree breeding and showing.

A change in demand by the meat trade, and a developing prejudice against ‘coloured’ pigs, led to a severe decline in numbers throughout the 1960’s.  The creation of the Rare Breeds Survival Trust in 1973 led to the Large Blacks being placed on the Trust’s list of ‘critical’ breeds.

The individual bloodlines within the breed continue to be monitored on an annual basis.  There is also an ongoing programme for the collection of semen from Large Black boars for long term storage, with a boar standing at AI from time to time.

The British Lop originated in the south of England around the area of Tavistock either side of the Cornwall/Devon borders.

From the early years of the twentieth century it remained a local breed unknown outside its native territory. It suited the locality well and was in strong demand so there was little incentive for it to be known elsewhere. In those days it was registered and known as the National Long White Lop Eared. In the 1960s the name was changed to the one we know today, the British Lop.

At the end of the war the UK needed to maximise food production and in 1947 the government introduced the Agricultural Act which recommended that British pig farmers focus on more viable commercial breeds such as the Landrace, the Large White and the Welsh. As a consequence the British Lop was one of the breeds which was marginalised and was bred only by a small band of farmers in the West Country.

The Rare Breeds Survival Trust (RBST) was established in 1973, and the Lop was then recognised by them as one of the six rare pig Breeds. The inclusion of a breed as officially listed as ‘rare’ generally increased interest in them, and indeed the Lop is more populous now than at any time in the last 30-40 years. However, it suffered in comparison with other rare breeds by not looking particularly distinctive. It is after all, as the name suggests, a white lop-eared pig and to the non-specialist can easily be confused with the Welsh or Landrace. Enthusiasts tend to be more interested in pigs with brighter colours, spots or short snouts, rather than a ‘normal looking’ pig.